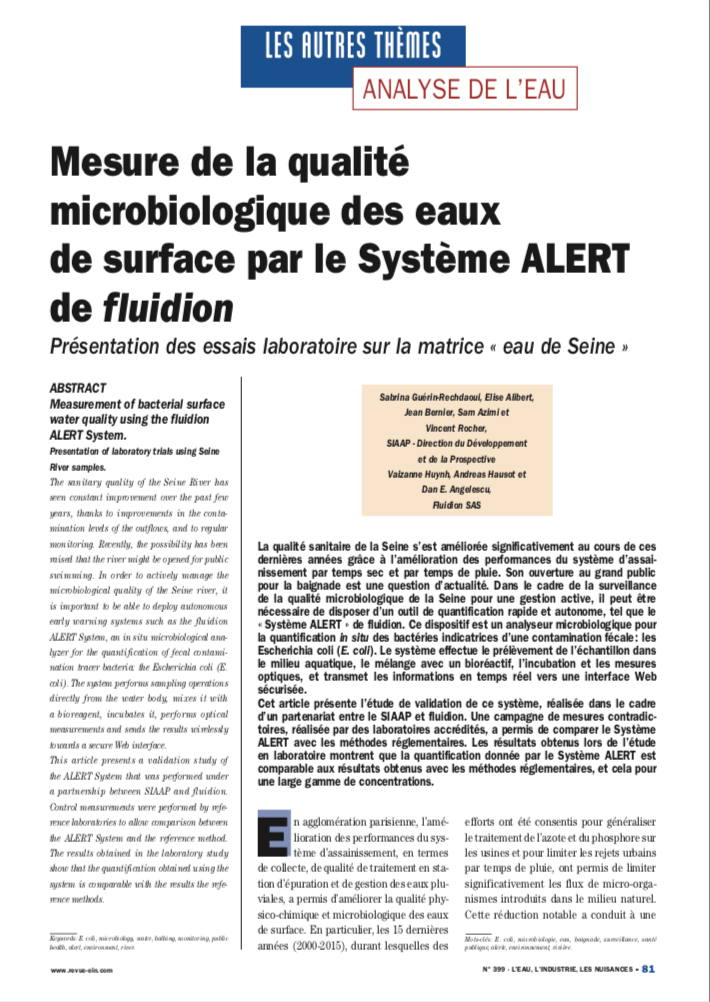 A new scientific article from fluidion, in collaboration with the SIAAP (Paris Wastewater agency), published in the Eau Industrie Nuisances magazine No.399, p.81 (2017), focused on the validation of ALERT technology for microbiological monitoring in surface fresh waters.

Abstract: The sanitary quality of the Seine River has seen constant improvement over the past few years, thanks to improvements in the conta- mination levels of the outflows, and to regular monitoring. Recently, the possibility has been raised that the river might be opened for public swimming. In order to actively manage the microbiological quality of the Seine river, it is important to be able to deploy autonomous early warning systems such as the fluidion ALERT System, an in situ microbiological ana- lyzer for the quantification of fecal contami- nation tracer bacteria: the Escherichia coli (E. coli). The system performs sampling operations directly from the water body, mixes it with a bioreagent, incubates it, performs optical measurements and sends the results wirelessly towards a secure Web interface.

This article presents a validation study of the ALERT System that was performed under a partnership between SIAAP and fluidion. Control measurements were performed by refe- rence laboratories to allow comparison between the ALERT System and the reference method. The results obtained in the laboratory study show that the quantification obtained using the system is comparable with the results of reference MPN methods.

Available here, or by written request.